The Book of Acts

The Book of Acts is the continuation of the Gospel of St. Luke. Luke was a physician (Colossians 4.14) who accompanied Paul in his mission work. He wrote in excellent Greek, and he shows a good knowledge of the Old Testament. It was written before the destruction of Jerusalem in A.D. 70 and before Paul's death (A.D. 66-68) and the persecution of Nero (A.D. 64).

Chapter 01
40 days of infallible proofs... Wait for the promise of the Father-the Spirit... Witnesses in Jerusalem, Judea, Samaria, ends of the earth... Ascension Mt of Olives... Upper Room Prayer... Judas replaced by Matthias, chosen by lot.

Note: What is Speaking in Tongues? In different places and times Christians praised God in an unknown language. Paul mentions this in 1 Corinthians 13.1. Not all Christians spoke in tongues, but for those who did, it was a sign of the work of the Holy Spirit. For the Jewish disciples, it became a sign that Gentile believers also had the Holy Spirit. This was important because in the early Christian church the Jewish believers sometimes had difficulty seeing the Gentiles as true and equal believers in Christ.

Chapter 04
5,000 believe... Peter John arrested, testify to Psalm 118 rejected stone... Uneducated but had been with Jesus... Released, commanded not to teach in the name of Jesus... Prayer for boldness and signs and wonders... Sold possessions, Barnabus, All in common

Chapter 07
Stephen's Testimony: Abraham, Isaac, Jacob, Joseph... Joseph and patriarchs brought back from Egypt... Moses, The Prophet like Moses, The Tabernacle, Solomon's Temple, Most High not in temples, Resisting the Holy Spirit, Persecute the prophets, Angered hearers, Vision of Jesus at the Right Hand, Clothes at the feet of Saul, Stephen prays for their forgiveness.

Chapter 09
Saul meets Christ on the road to Damascus... Ananias baptizes Saul and he preaches Christ.... Jews attempt to kill him.... Saul goes to Jerusalem and argues with Greeks... the church-peaceful, edified, multiplied in the comfort of the Holy Spirit... Peter heals Aeneas at Lydda... Peter raises Dorcas "Tabitha arise."

Chapter 10
Cornelius, centurion, devout, feared God, gave alms, prayed always… Angel of God-send for Peter… Peter's vision of the sheet with animals in Joppa… Peter goes to Caesarea… Unlawful for Jew to keep company with Gentile… Cornelius had fasted and prayed till the ninth hour… Peter-No partiality, accepts those who fear God and work righteousness-They knew the preaching of Jesus-Whoever believes in Him receives remission of sins… Holy Spirit falls, Gentiles speak with tongues… They were baptized.

Chapter 11
Circumcision party objects to Peter eating with Gentiles… P recalls what happened, P remembers promise of the bap of the H Sp promised by Jesus, God has granted grace to the Gentiles… Those scattered from persecution preached to Jews only, but some to Greeks in Antioch, many believe… Barnabus sent to affirm, then goes to Tarsus to get Saul… They taught for a year in Antioch, disciples first called Christians at Antioch, Agabus prophecies world famine in the days of Claudius… Disciples send relief to Judea according to ability by Barnabus and Saul.

Chapter 12
Herod kills James, brother of John and pleases the Jews… Peter arrested, constant prayer for him by church, angel frees him… Peter comes to house of mother of John Mark, Rhoda is astonished… Herod put guards to death, Herod struck down by angel of the Lord because people said his was the voice of a god… Word of God grew and multiplied, Saul and Barnabus return from Jerusalem and take John Mark.

Chapter 14
Synagogue Jews and Greeks believed at Iconium… Unbelieving Jews oppose… Signs and wonders… Attempted stoning, fled to Lystra & Derbe… Cripped man healed… People call B Zeus and P Hermes, want to sacrifice…. P says they are men who serve the Creator… Jews from Antioch and Iconium come, Paul stoned but not dead… Preaches the Gospel in Derbe… Returns to Lystra, Iconium & Antioch strengthening the souls… Appointed elders in every church, prayed & fasted… Passed through regions of Pisidia & Pamphylia… Preached in Perga… Sailed from Attalia to Antioch… Reported that the Lord opened the door of faith to the Gentiles and stayed a long time in Antioch.

Chapter 18
Paul to Corinth, Finds Aquila & Priscilla, Reasons in the synagogue… Opposed & blasphemed, Turned to Gentiles-Justus, Crispus, ruler of syn believes… Vision: I have many people in this city, Continued 1.5 years teaching word of God… Gallio won't hear complaints of Jews. But they beat Sosthenes, ruler of the syn… Paul left P&A at Ephesus and went to Caesarea/Antioch/Galatia/Phrygia strengthening disciples… Apollos at Ephesus. Instructed by P&A about baptism… Goes on to Achaia. Shows Jesus is the Christ.

Chapter 19
Apollos at Corinth, Paul to Ephesus, Didn't know of the Holy Spirit? 12 baptized in Jesus, spoke in tongues... Reasoned in the syn 3 months. Some hardened. Went to school of Tyrannus. Taught 2 years... Paul performs miracles. Seven sons of Sceva, Jewish priest, try to exorcise in the name of Jesus. Attacked by demoniac. Magic books burned. Word of the Lord grows… Demetrius made shrines to Diana. Stirs up crowd. "Great is Diana (ESV Artimus) of the Ephesians." People confused, City Clerk: Go to the courts.

Chapter 20
Paul encourages in Greece, Troas, Several accompany, “we” passages begin… Weekly Communion, Eutychus falls & is healed… Heading to Jerusalem, Miletus-Exhortation to Ephesians Elders… Repentance toward God and faith in Jesus… Whole counsel of God declared… Commend them to God and to the word of His grace… Work hard to help the weak, more blessed to give than to receive.

Chapter 21 - Paul Goes to Jerusalem
Landed at Tyre and stayed with disciples 7 days… Warned through Spirit not to go to Jerusalem, Men, wives and children see them off; Caesarea, House of Philip, Four Virgin Daughters Prophesy, Agabus prophesies deliverance to Gentiles, People cease warning, The Lord's will be done… Jerusalem  Paul meets with James and Elders… Concerns of Law Keeping Believers… Paul goes to Temple for Vows, Riot, Arrest… Paul speaks in Hebrew

Chapter 22
On the steps of the barracks Paul speaks in Hebrew... Tells  of the Damascus conversion, while praying in the Temple he is told by God to go to the Gentiles... The commander prepares to scourge, Paul appeals to his citizenship... The commander calls the Sanhedrin.

Chapter 23
Paul divides the Sanhedrin by speaking about the resurrection...The Lord tells Paul he must testify in Jerusalem and Rome... Paul's nephew hears of a plot to kill Paul and goes to the commander... The commander sends him to Gov. Felix where he can be accused by the Jews and judged.

Chapter 24
The High Priest brings an orator named Tertullus to accuse Paul of being a troublemaker... Paul defends himself that he was not causing a tumult... Felix and his wife Drusilla hear him speak of righteousness and self control... Felix is troubled, procrastinates two years, leaves Paul in prison to please the Jews, is succeeded by Porcious Festus.

Chapter 25
High Priest accuses before Festus, cannot prove charges… Festus recommends trial in Jerusalem… Paul appeals to Caesar… King Agrippa and Bernice visit Festus… Festus asks Agrippa to hear Paul because he can't form any charges against him to send him to Caesar… Certain questions about Jesus who died but Paul affirmed to be alive.

Chapter 26
Agrippa hears Paul… Paul on trial for promise made to the OT fathers… Paul tells how he persecuted Christians, voted for their deaths, forced them to blaspheme, the Damascus Road conversion and commission… Agrippa asks if Paul is mad with learning… No. Words of truth and good sense… Agrippa almost converted…No charges established.

Chapter 27
Paul is taken on the Journey to Rome with a centurion named Julius… Aristarchus of Thessalonica accompanies along with Luke… Sailing is difficult because of winter… Paul warns of shipwreck… Visited by an angel. 14 days no food… Break bread… Ship runs aground and begins to break up… Some want to kill the prisoners… Centurion intervenes… Swimmers swim… The rest float on planks.

Chapter 28
People of Malta are kind… Kindle a fire in the rain… Snake bites Paul… Superstitious ones think Paul a murderer… Doesn't die… Think he's a god… Publicus entertains 3 days… Paul heals his father… Other diseases healed… Christians meet them as they approached Rome… Paul allowed visitors… Paul calls the leaders of the Jews and persuades from Moses and the Prophets all day… Some believe… Paul ends with Isaiah 6, keep preaching but they won't believe… Paul says that salvation comes to the Gentiles… Paul preaches for two years from a rented house. 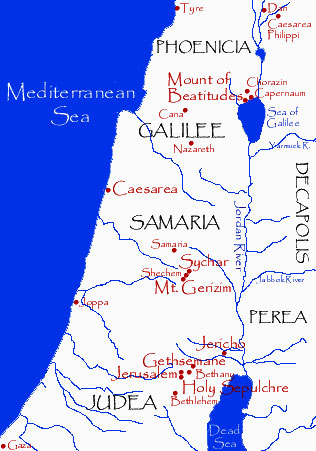 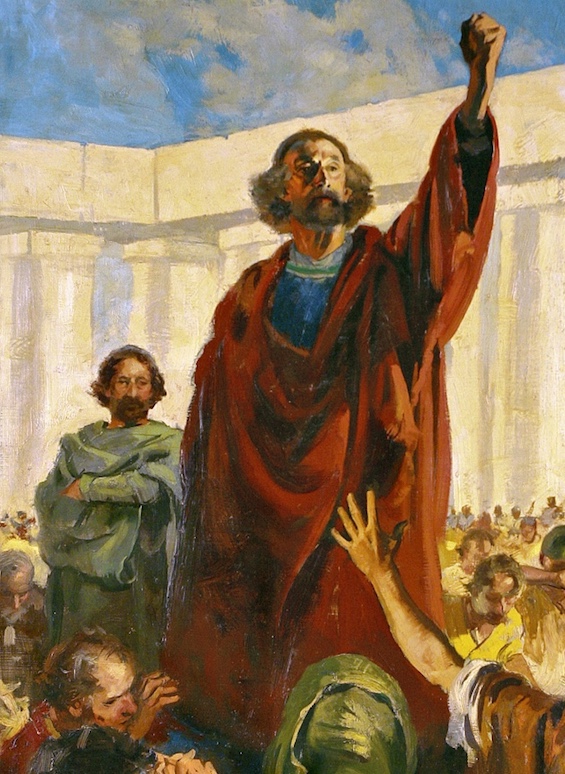 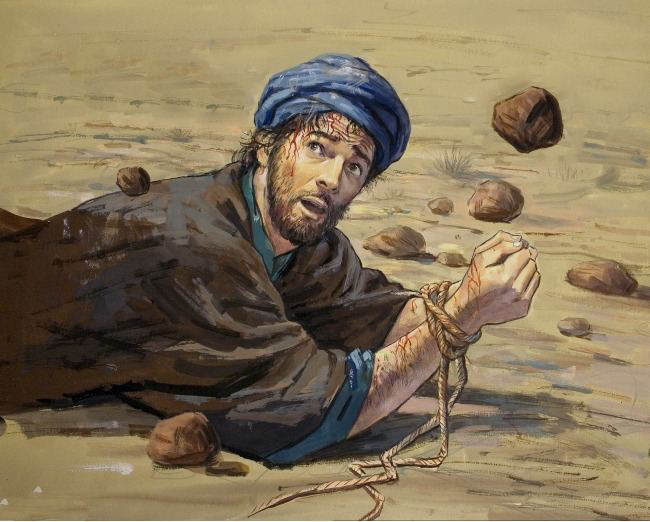 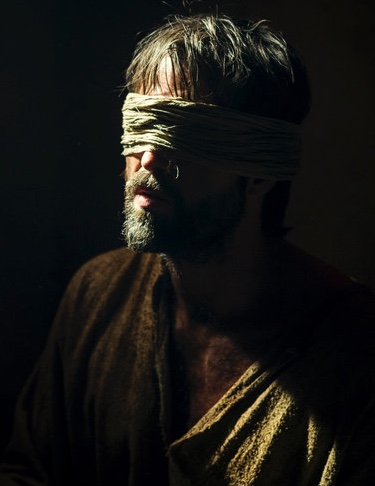 Saul, Blinded from the movie
A.D. Kingdom and Empire