The Gospel of John

John and his brother James were fishermen. They were part of the inner circle of disciples of Jesus along with Peter. John outlived all the other disciples and probably wrote this Gospel between A.D. 85 and 95. He clearly states that his purpose was to write down the words of works of Jesus so that people would believe in Him (John 20.31).

John records seven signs that showed Jesus was the Son of God. He also includes seven sayings (the “I Am” sayings) that show Jesus was the Son of God. In the first twelve chapters John explains how Jesus preached to Israel but was rejected by most. He often refers to the “Jews” or “Judeans” who would not believe in Him. In chapters 13-17 Jesus withdraws and teaches those who believe. In chapters 18-20 John describes Jesus’ death and resurrection.

01 John the Baptist, Jesus, and the First Disciples
The Word was God and made all things. John the Baptizer bore witness to Him. He was rejected by many, received by those born again. The Word became flesh. John prepared the way baptizing for repentance. John baptized Jesus and proclaimed He was the Lamb of God who takes away the sin of the world. Andrew followed a Jesus and brought Peter to Jesus.

02) The Wedding at Cana and Clearing the Temple
Jesus turned the water into wine at the wedding in Cana, His first sign of His glory. Jesus cleared the Temple and promised His resurrection. Many believed in His name.

03) The Night Meeting with Nicodemus
Jesus meets with the Pharisee Nicodemus and tells him that we must be born again by the Spirit and the water. He will be lifted up like the serpent of Moses to save. Jesus was baptizing in Judea. John the Baptizer stresses that he is not the Christ but was sent to bear witness to Him. Only those who believe in Him will be saved.

04) Jesus and the Samaritans
Jesus taught the Samaritan woman at the well. He is the Messiah. Jesus taught His disciples that He and they are like harvesters gathering souls like wheat. Many Samaritans believed. Jesus returned to Galilee. He healed the son of a nobleman, His second sign.

05) Healing the Man at Bethesda
Jesus healed the man at Bethesda on the Sabbath. The Jews objected to the man carrying his bedding and tied to kill Jesus. The one who believes in Jesus has everlasting life. Jesus’ works bore witness that He was sent by the Father. Those who believe in Moses would believe in Jesus

06) Feeding Five Thousand, The Bread of Life Sermon
Jesus fed the five thousand, and the people acknowledged Him to be the Prophet that Moses had promised. Jesus walked on the sea and calmed the storm. He and the disciples came to Capernaum. The work of God is to believe in His Son. Jesus said He is the Bread of Life. Those who eat His body and drink His blood have eternal life. Some disciples left. Peter said Jesus had the words of eternal life and was the Son of the living God.

07) Jesus at the Feast of Tabernacles
Jesus stayed In Galilee because the Jews wanted to kill Him. His brothers urged Him to go the Feast Of Tabernacles. Jesus defends His healing on the Sabbath and calls for righteous judgement. Jesus confronts those who want to kill Him. Jesus said He gives the living water of the Holy Spirit. The people debate if He was the Christ. Nicodemus defended Jesus.

08) Jesus Forgives and Debates His Forgiveness
Jesus forgave the woman caught in adultery. Jesus said He is the light of the world. Jesus claims the witness of the Father. Jesus warned that those who did not believe in Him would die in their sins. Jesus said those who abide in His word will have the truth and be free from sin. Jesus said He was before Abraham. The scribes and Pharisees try to stone Him.

09) Jesus Heals the Man Born Blind
Jesus healed the man born blind on the Sabbath. The Jews who did not believe were angry. The blind man confessed his faith in Jesus, the Son Of God. Jesus warned the unbelievers of their blindness.

11) Jesus Raises Lazarus
Mary and Martha sent word to Jesus that their brother Lazarus was sick. He waited two days until Lazarus had died. Four days after His death Jesus came. He said He was the resurrection and the life. He wept for Lazarus. He raised him from the dead. The Pharisees and Council began plotting to kill Him. Caiaphas, the High Priest, said that it was expedient for one to die for all the people. He did not know the significance of his words.

12) Jesus Is Anointed, He Enters Jerusalem with Hosannas
Mary, sister of Martha, anointed Jesus feet with costly oil. Judas objected. The Jews wanted to kill not only Jesus but Lazarus also. Jesus entered Jerusalem for the Passover on a donkey while the people praised Him. Greeks ask to see Jesus. Jesus predicted His death and resurrection. Jesus said He spoke with the authority of the Father.

13) The New Commandment of Love, The Betrayal of Judas
John does not repeat what the Synoptic Gospels told of the preparation for and celebration of the Passover meal and institution of the New Covenant. He does tell us that Jesus taught the disciples to be servants by washing their feet. Yet Judas, the betrayer, was not clean. Jesus identified Judas to John. Judas was taken over by Satan and departed. Jesus gave the New Commandment to love one another. Jesus told Peter He was departing, but that he would follow. Peter confirmed his love, but Jesus said he would deny Him.

14) Life in the Father, Son, and Holy Spirit
Jesus told the disciples He was going to prepare a place for them and all who believed in Him. Jesus affirmed His unity with the Father. Through faith and prayer, Jesus said His disciples would do great works as He had done. Jesus promised the Comforter/Holy Spirit. Jesus then led them out.

15) Jesus Is the Vine, The World’s Hatred
Jesus said we are like vine branches and He is the vine. We are pruned to grow and bear fruit. Because we are chosen out of the world, the world hates us. The world hates Jesus without cause. Jesus will send the Spirit who will testify of Him.

16) The Promise of the Holy Spirit
Jesus promised the Holy Spirit to teach them all truth. He would leave, and they would be sorrowful. But their sorrow would be turned to joy. In the world we will have tribulation, but Jesus has overcome the world.

18)  Betrayal and Arrest in Gethsemane
Jesus went to Gethsemane. Judas led soldiers there to arrest Him. They took Him to Annas. Peter denied Jesus three times. They took Him to Caiaphas and then to Pilate. Jesus is a king who brings the truth. Pilate found no fault. He tried to release Him, but the people chose Barabbas instead.

19) The Crucifixion
Pilate scourged Jesus. The soldiers abused Him. The people called for His crucifixion because He said He was the Son of God. The people said Pilate would not be a “friend of Caesar.” Pilate delivered Him to be crucified. He posted a sign on the cross. The soldiers divided His garments. Jesus entrusted His mother to John. Jesus said “It is finished” and died. The soldiers pierced His side, and water and blood poured out. Joseph of Arimathea and Nicodemus buried Him in the new garden tomb.

20) The Resurrection
Mary Magdalene went to the mob early and saw that it was empty. Jesus told Peter and John. They ran to the tomb and saw the burial clothes. Mary saw two angels in the tomb. She turned and saw Jesus, who said He must ascend to the Father. Jesus appeared to the disciples that evening. He gave the Holy Spirit and the work of repentance and forgiveness. The next week Thomas doubted, but then believed when He touched Jesus. Jesus did other signs. These are written that we may believe Jesus is the Christ.

21) Breakfast by the Sea
Seven disciples went fishing at Galilee and caught nothing. In the morning Jesus told them to cast again, and they caught 153 fish. They ate breakfast. Jesus asked Peter three times if he loved Him. Peter asked about John. Jesus did many other things. 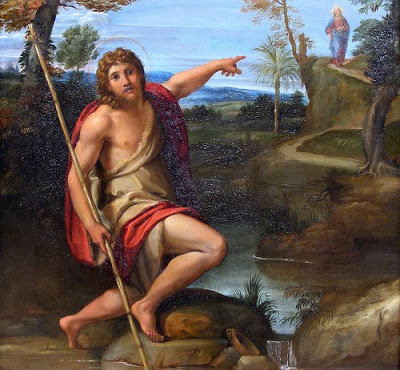 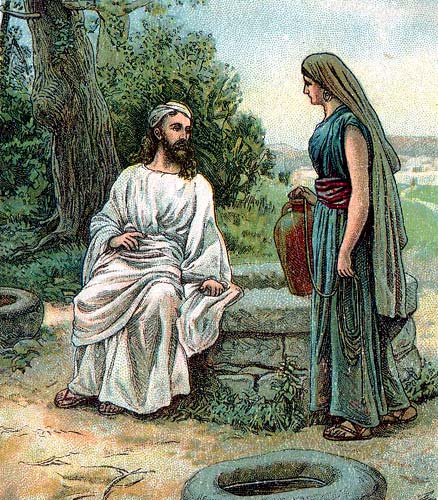 The Woman at the Well 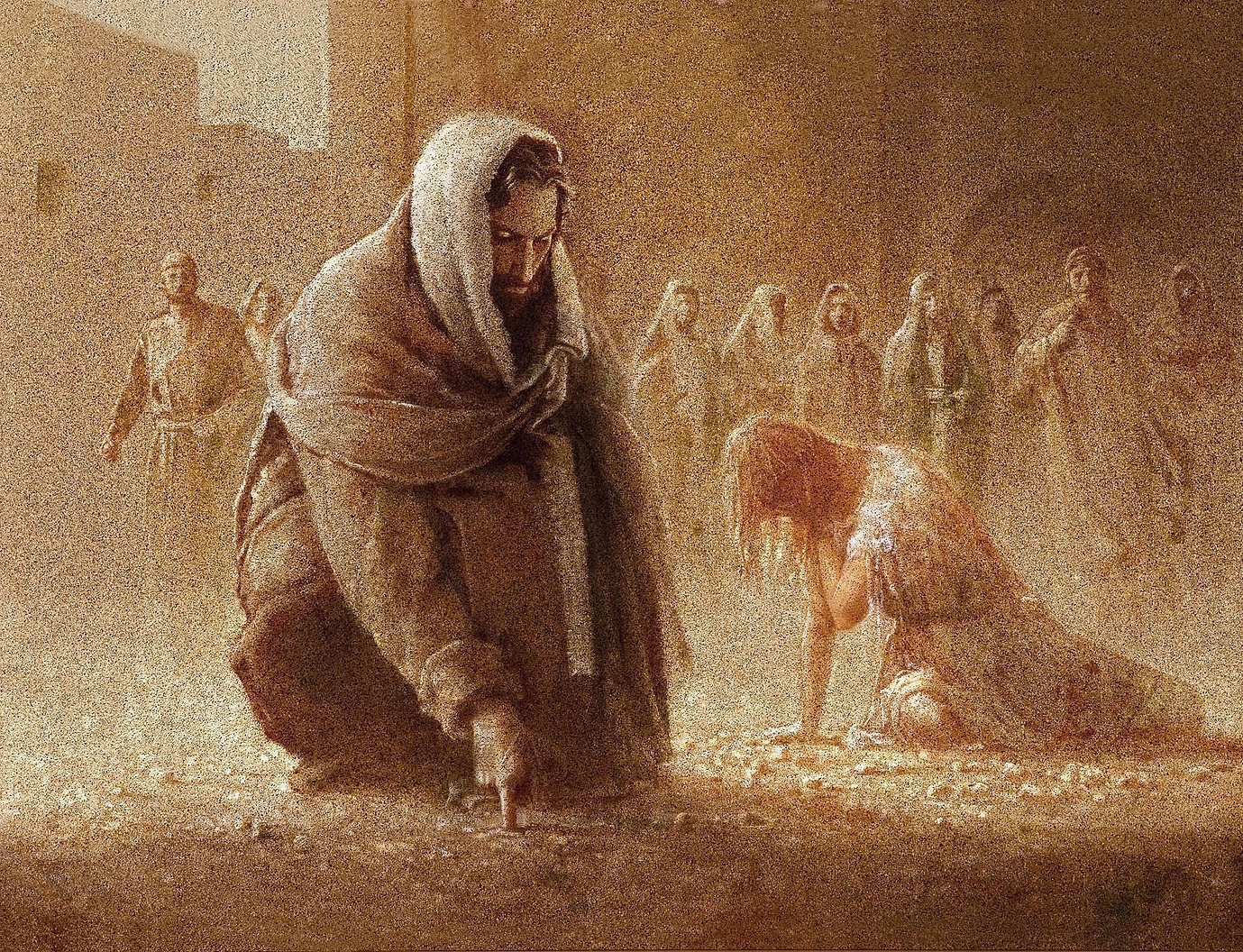 The Woman Caught in Adultery 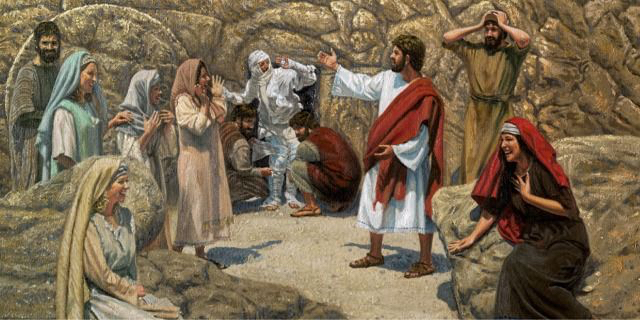