God's plan of salvation began with Adam and Eve when He promised that one of their descendents would destroy the one who brought evil into the world. God prepared for that special person (Messiah) by creating the nation of Israel. That began when the LORD called Abraham and promised that his descendants would live in the land of Canaan (Gen 12.2-3). By the time of Jacob, Abraham's grandson, the people had become a large tribe. Jacob's name was also "Israel." Because of a famine, they left Canaan and went to Egypt where they were enslaved for over 400 years. Moses led the people of Israel out of Egypt, through the wilderness, and to the shore of the Jordan river. Joshua led them across to the promised land and with God's help they destroyed the wicked nations of Canaan. God warned them not to turn to the gods of Canaan, but He said eventually they would and that they would also perish from the land. Nevertheless, through all of this, God did establish the people of Israel. From them He would bring the true Savior, Jesus, who would finally destroy not just the outward effects of evil as Joshua did, but the very root of it. The name "Joshua" and "Jesus" are the same name with a slightly different pronounciation. The name means "The LORD Saves."

What About the Destruction of the Canaanites?

At first it is difficult to understand why God would call for the destruction of the Canaanites (men, women and children). Was this a kind of ethnic cleansing? Is this justification for modern Jihad as some Muslims claim? Not at all. The destruction of the Canaanites was God's judgment on their wickedness - not just because they opposed Israel. Their wickedness and their destruction was known long before Joshua's conquest (Gen 15.13-16). We do know that the Canaanites had wicked practices such as child sacrifice to the god, Molech. This destruction was only commanded for them and for anyone who would sink into such abominable behavior. This even included Israel as they were sternly warned by God (Jos 7.11-12; Mal 4.6; Lev 18.28). Some of them did resort to child sacrifice, and therefore received they received same punishment.

As God formed this nation, we need to remember that it was a "theocracy." That is, it was both a spiritual and political nation. It was "church" and "state." This was part of God's plan to bring His Son spiritually and physically into this world. Despite Israel's many sins and judgments, God preserved a remnant of this spiritual and physical people living in the land He promised until Jesus was born in Bethlehem. You might think of Israel as the foundation upon which God built the Temple of His Son. When Jesus came, He ultimately fulfilled all the promises to Israel - the land, the sacrifices, the temple, and the Law of Moses. Now, when we think about these things, we should think about Jesus. He made it possible for all nations to be part of Israel and to receive the mercy of God. In preparing for this it was important for Joshua, David and other kings of Israel to use swords to fight against wicked nations and to preserve the people of Israel physically. But with the arrival of the Messiah, the wars of Israel ceased. Today we fight the wickedness of the world with the sword of the Spirit, the word of God (Galatians 5).

01) The LORD Sends Joshua
The LORD tells Joshua to go over the Jordan to possess the promised land. Boundaries: Wilderness (south) to Lebanon too Euphrates. The LORD will be with Joshua. He is to obey the Law of Moses and be courageous. The Reubenites, Gadites and half tribe of Manasseh were to send soldiers even though they were settled on the west side of the Jordan.

03) The Ark and the People Cross the Jordan
The crossing starts with the ark of the covenant. The people follow. The water of the Jordan stopped and heaped up. All the people crossed over.

04) Twelve Stones
Twelve stones for the Twelve Tribes are taken from the Jordan to create a memorial. Joshua also sets twelves stones in the Jordan.
The priests carried the ark to the middle of the Jordan while the people passed by. Finally the priests and ark crossed and the Jordan resumed its flow. The first camp was in Gilgal. Joshua instructs Israel to teach their children about the crossing of the Red Sea and the Jordan. It was the tenth day of the first month.

05) Circumcision
Joshua circumcised all those who had been born in the wilderness. Israel kept the Passover on the fourteenth of the first month at the plains of Jericho. The manna ceased, and they began eating the food of Canaan. Joshua met “The Commander of the LORD’s Army.” The LORD’s army probably refers to His angels (2 Kings 6.8-17; Matthew 26:53; Hebrews 1.14).

06) Destruction of Jericho
Seven priests blew seven rams horns before the ark as all the men marched around the city for six days. On the seventh day they marched around it seven times, gave a great shout, and the walls of Jericho collapsed. Rehab and her family were spared. All other people and animals were killed. The silver, gold, bronze and iron vessels were put in the treasury. Otherwise the people were not to take anything. Joshua cursed anyone who tried to rebuild the city.

07) Defeat at Ai
Israel was defeated by Ai because Aachan had taken spoils which were to be destroyed. He repented, but he was stoned and burned. They raised a heap of stones over him named the place the “Valley of Achor.”

08) Ai Defeated
Joshua defeated Ai using feigned withdrawal and ambush. They took the livestock and booty as directed by the LORD. They burned the city and made it a great heap. Joshua built an altar of unheeded stones at Mt. Ebal and offered sacrifices. He also wrote a copy of the Law of Moses and read it to the people. The people divided to Mt. Gerizim and Mt. Ebal for the blessings and cursing that Moses had commanded.

09) Treaty with the Gibeonites
The Hittites, Amorites and Hivites united to fight against Israel. The Gibeonites dressed in old clothes with dry bread and asked for a covenant. Israel did not consult the LORD about this. When they discovered the rouse, they forced them to be wood cutters and water carriers.

10) Joshua Destroys Cities
The king of Jerusalem assembled a coalition to attack Gibeon. Joshua marched through the night and surprised and routed them. The LORD sent hailstones that killed more than with the sword. Joshua called for the sun to stand still, and it did for a day. Joshua killed five kings of the coalition. Joshua destroyed Libnah, Lachish, Eglon, Hebron, and Debir. Joshua returned to Gilgal.

What about the sun standing still?
Some interpret this to be a poetic way of saying that God so strengthened Joshua that “it seemed as though the sun stood still.” But “seemed” could have certainly been expressed in the text. Instead Joshua tells of a literal day that had never occurred before or since. God is the creator of the universe. Therefore it is possible for Him to control the natural movements of the planets that He began in the first place. Those who say this is foolishness are also the same ones who say that all things occur by accident and that the universe is itself an accident. The reader has to decide which understanding is true and which is foolish.

11) Conquests
The northern armies joined together to attack Israel. Joshua destroyed them and Hazor, the head of those kingdoms. The chapter then summarizes the conquests of Joshua.

14) Dividing the Land to the West
The land was divided for the nine tribes and the half-tribe.  Caleb asked that the LORD’s promise be fulfilled that he would get the land upon which he walked. He chose Hebron.

15) The Division Of Judah
The borders Of Judah are given - the land from the Dead Sea to the Mediterranean. Caleb is given a Kirjath Sepher. The cities of Judah are named. They did not drive the Jebusites from Jerusalem.

16) The Division Of (West) Manasseh and Ephraim
This is the division of Joseph which was called the two half tribes according to his two sons, Manasseh and Ephraim. This land was north of Judah between the Jordan and the Mediterranean. They did not drive out the Canaanites Of Gezer. But they became forced laborers. East Manasseh was settled on the eastern side of the Jordan.

17) The Division for Manasseh (West)
The division was given to the half-tribe of Manasseh. Manasseh requested more, but Joshua would not give more.

18) Survey and Division for Benjamin
The Tabernacle was set up at Shiloh. Joshua sent surveyors to survey the land into seven parts. Benjamin had a small division, however, they also had important cities.

19) Divisions for the Rest of the Tribes
The division for Simeon was within that of Judah because Judah’s lot was too much for them. The division and the cities of Zebulun, Issachar, Asher, Naphthali, and Dan were given. Joshua was given the city of Timnath Serah in Ephraim. All the divisions were made by lot at the tabernacle in Shiloh.

20) Cities of Refuge
Certain cities were designated for places of refuge in case of manslaughter. The person responsible could flee to one of these cities and remain there until the high priest died.

21) Cities for the Levites
The Levites had no division. However, they were scattered through all the tribal lands by possessing cities within those lands. This was the conclusion of the conquest as the LORD had promised Israel.

22) Eastern Tribes Return and Build a Replica Altar
Reuben, Gad & the half tribe of Manasseh returned to their lands east of the Jordan. They built an altar which at first upset the other tribes thinking they had turned from the LORD. But the altar was not for sacrifices but to remember that they belonged to Israel too.

23) God Fought for Israel, But They Will Perish From the Land
Joshua calls the leaders and remembers what the LORD had done for them. He encouraged them to be courageous to follow the Law of Moses. They were not even to mention the names of the gods of the land. But if they followed what was left of these nations, they would perish from the land. As God kept the promises of good, so He will keep the promises of harm when they have served the other gods.

24) Covenant Renewal in Shechem
Joshua reminds them how God took Abraham and led him to Canaan. He multiplied his descendants. He saved them from Egypt through Moses and Aaron. He led them through the wilderness and delivered them from the Amorites and Balaam and the Moabites. He gave them victories over the nations in the land, and they possessed their vineyards and olive groves. Therefore they should put away the gods that the family of Abraham served and that they served in Egypt to serve the LORD. This covenant renewal took place in Shechem. Joshua died at age 110. The bones of Joseph were buried in Shechem. 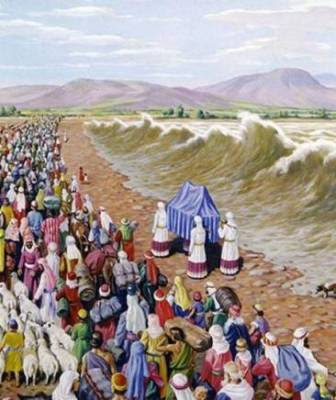 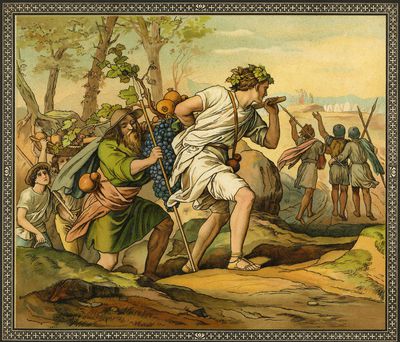 Joshua and Caleb led the first spies into Canaan in the Book of Numbers. But Israel was afraid to start the conquest then. They wandered in the wilders for 40 years until that generation died. 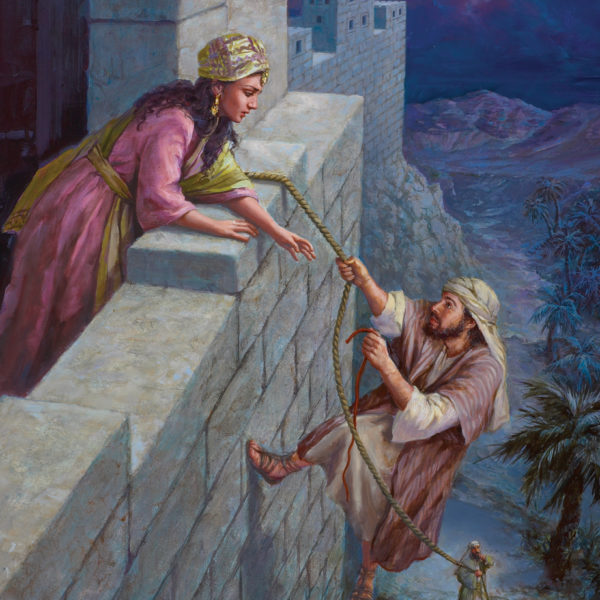 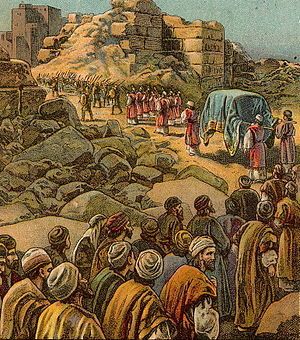 The Destruction of Jericho