The Book of Judges

The Book of Judges tells us of twelve “judges” or leaders of Israel during the period between Joshua and Samuel. We’re not certain of the author, although it probably was Samuel.

Israel’s spiritual health was probably at its peak during the time of Joshua. From there it began to spiral downward until the LORD raised up King David. After David, it continued to spiral downward until the time of Jesus. Judges teaches us about the consequences of spiritual indifference, disobedience and apostasy. But it also shows us how God often intervenes to keep His plan of salvation going, and prepares us for the ultimate king we need in Jesus. An important theme verse would be “In those days there was no king in Israel. Everyone did what was right in his own eyes” (Judges 21.25). Moses had prepared Israel for a godly and spiritual king who would study the law, live it and lead according to it (Deuteronomy 17.18-20). Judges shows us why Israel needed a godly king and why we need one as well.

02 The Cycle of Disobedience, Defeat and Deliverance Begins
The Angel of the LORD appeared at Bochim (“weeping”) and warned Israel about not obeying His voice. The nations remaining in the land would be a problem. Joshua died at 110 years. When that generation died, another arose that “did not know the LORD.” They served the Baals. The LORD let their enemies prevail, but He also raised up judges to help them.

04) Deborah
After Ehud, Israel again did evil. But God raised up Deborah to judge Israel. She summoned Barak to call up the army to fight Jabin’s army. The routed them and pursued their general, Sisera. While he slept in a tent Jael, a Kenite, killed him. The Kenites were friendly with Israel since Moses’ father-in-law, Jethro, was a Kenite.

05) The Song of Deborah
Deborah praisesd God for the strength He gave to defeat Israel’s enemies.

07) Gideon and the Three Hundred
Gideon is told to thin out his ranks so that Israel doesn’t take the glory to themselves. Three hundred surprise the Midianites in the night by blowing trumpets and lifting torches. The Midianites stayed each other in the confusion.

09) Abimelech and the Curse of Jotham
Abimelech was the son of Gideon (also called Jerubabaal) by a concubine of Shechem. He was probably shunned by the other seventy sons of Gideon. Abimelech killed them all except for the youngest, Jotham. The people of Shechem chose Abimelech to rule over them. Jotham told a story that cursed Shechem and Abimelech who he compared to a bramble. Abimelech’s evils caught up with him when a woman dropped a millstone on his head.

10) Tola, Jair Judge Israel
Tola and Jair judged in Israel for 45 years combined. Israel continued to serve other gods, and the LORD delivered them into the hand of the Philistines and Ammonites. Israel repented, but God let their suffering continue and told them to cry out to their other gods.

11) Jephthah
Jephthah was illegitimate. His brothers drove him away from the family. When Ammon attacked Israel, Israel asked Jephthah for help. Jephthah reminded Sion, King of the Ammonites that Israel took the land after the Ammonites had attacked Israel during the Exodus. Jephthah vowed to sacrifice whatever came out of the door of his house to meet him after the battle. Jephthah’s daughter came to greet him.

12) Shibboleth or Sibboleth?
The Ephraimites fought against Jephthah and the Gileadites and were defeated. The Gileadites seized the fords of the Jordan. When the Ephraimites tried to escape across the Jordan, they were caught and forced to say “Shibboleth.” But they gave away their identity when they pronounced it “Sibboleth” and were killed. The three next judges were Ibzan of Bethlehem, Elon of Aijalon, and Abdon of Pirathon.

13) The Birth of Sampson
Sampson was born a Nazarite to deliver Israel from the Philistines who had dominated them for 40 years. Manoah, his father, prayed for guidance to teach him and offered a sacrifice to the Angel of the LORD.

14) Samson’s First Wife and Riddle
The LORD induced Samson to choose a Philistine woman because He wanted to set up their punishment. The Spirit of the LORD came on him and he tore a lion apart. Bees built a hive in the carcass. Samson used it to pose a riddle and promised 30 garments to the one who guessed it. His wife manipulated him to give away the riddle. Samson killed thirty Philistines and took their clothing. His wife was given to his best man.

15) The Foxes and the Jawbone
Samson went to get his wife but was blocked. He used foxes and torches to burn their crops. A slaughter followed. The Philistines went to war with Judah. The men of Judah bound Samson and delivered him to them. He broke the ropes and killed a thousand of them with a jawbone of a donkey. He was thirsty, and the LORD provided water for him.

16) Sampson Captured
Sampson went to a harlot in Gaza. When they tried to kill him, he destroyed the city gates. Samson loved Delilah, and the Philistines bribed her to discover the source of his strength. After three attempts he gives in, and the Philistines put out his eyes and make him a slave. His hair grew back. While they were making a spectacle of him, he pushed the temple pillars down and killed 3,000 Philistines. He also died and was buried with his father.

17) Micah Hires a Levite
Micah, from Ephraim, practiced his own homemade religion. He also hired a Levite.

19) The Homosexuals of Benjamin
There was no king in Israel. The concubine of a certain Levite played the harlot and returned to her home in Bethlehem. Her husband went to bring her back. As they were returning he avoided the Jebusites because they were foreigners. They stayed at Gibeah of Benjamin. The Benjamites were not hospitable. They stayed with an old man. The Benjamites came during the night to have sex with the traveller. He gave them his concubine instead. They abused her all night. In the morning he found her dead at the threshold. He cut her up in twelve pieces and sent them to the tribes of Israel.

20) The War with Benjamin
Israel fought against Benjamin because of the atrocity at Gibeah. The first two days the Benjamites defeated them. Each time the Israelites asked the Lord for guidance. On the third day they set an ambush. The Benjamites rushed to destroy them as on the other days. But the larger force of Israel attacked Gibeah and destroyed them. The Benjamites panicked, and Israel destroyed many of them.

21) Wives for Benjamin
Because of the destruction of Gibeah there were not enough wives for the remaining Benjamites. Israel took a vow not to give them any of their wives. Israel attacked Jabesh Gilead because they had not helped in the war against Benjamin. They took 400 virgins of Jabesh Gilead to give them to the Benjamites. These were not enough. They told the Benjamites to seize some of their virgins to provide wives while not actually breaking their vow.

There was no king in Israel. Everyone did what was right in their own eyes. 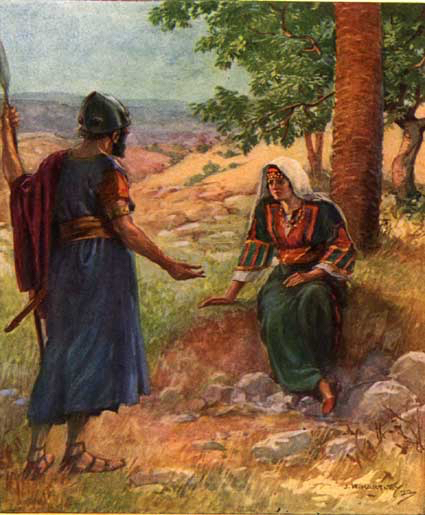 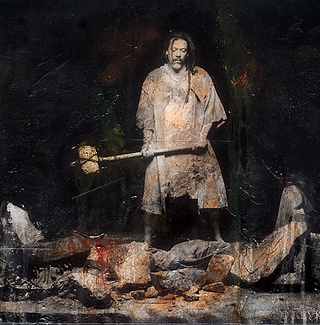 Gideon Destroys the Altar of Baal 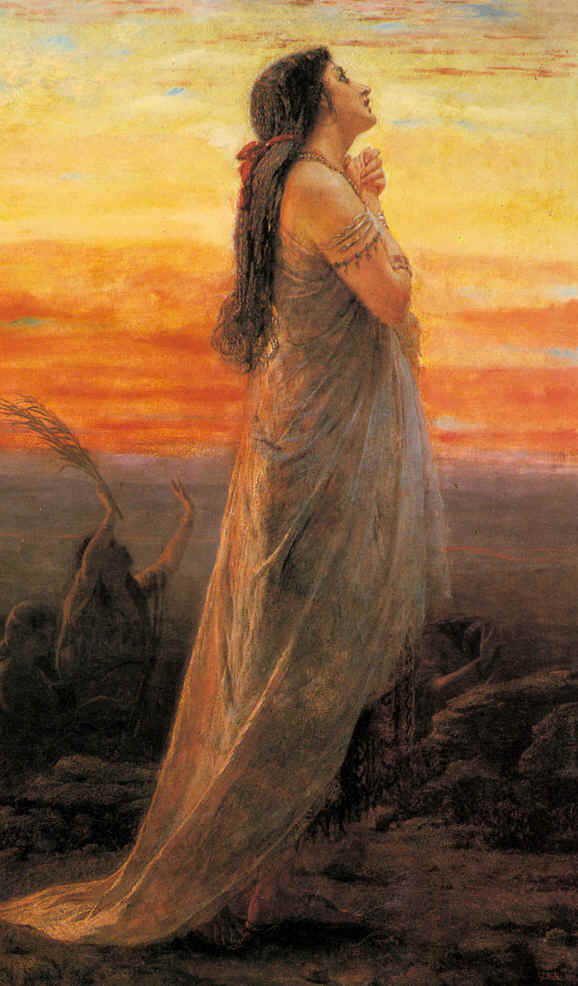 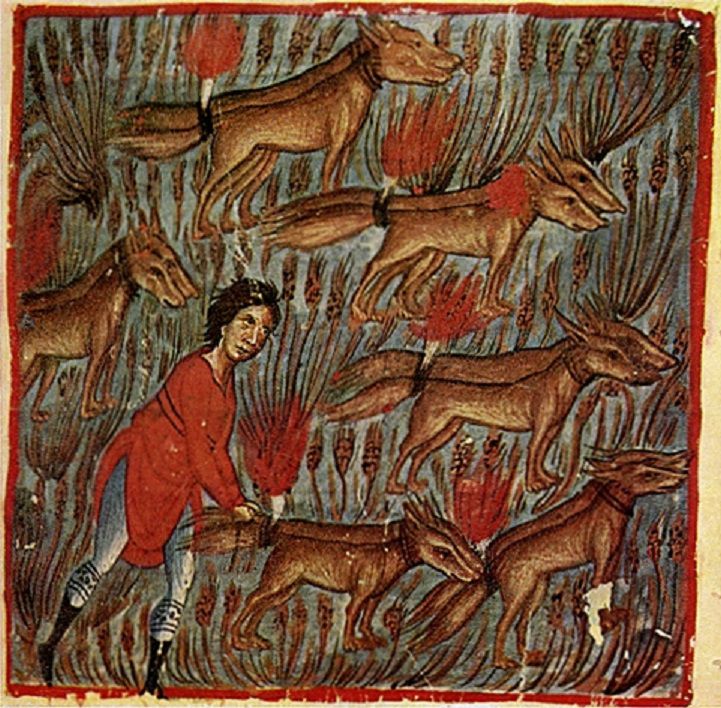 Sampson and the Foxes
From the 13th Century Vatopedi Manuscript