The Gospel of Mark

The Author and Theme

The author was most likely the disciple John Mark, who was an associate of Peter. While Matthew focuses on Jesus as the King of Kings and Luke on Jesus the Savior of All, Mark focuses on Jesus as the Son of God. We see this in very first verse and one of the last verses as the centurion confesses his faith (Mark 15.39). Mark was one of the first pastors of the New Testament. His Gospel was probably a summary of his teaching to the Christians in Rome especially coming from the perspective of the fisherman Peter.

Mark emphasizes the actions of Jesus more than the words of Jesus. He uses something called the "historical present" which makes the Gospel vivid and energetic. The historical present is like someone excitedly describing a baseball game that occured in the past as though it were happening in the present: "Then he hits a line drive to left field..." Mark brings out the intense opposition to Jesus and Jesus' equally intense efforts to overcome it. The Gospel encourages all Christians to follow Jesus and to face the same kind of rejection He faced with faith and conviction.

02 - Teaching By the Sea, Calling Sinners to Repentance
He was preaching the word. Healing paralytic at Capernaum.  Teaching by the sea. Called Levi,  the tax collector. Ate and drank with tax collectors and sinners. Came to call sinners to repentance. Fasting, New Wine. Plucking grain on the Sabbath. Son of Man Lord of the Sabbath

03 - Pharisees Want to Destroy Him
Healed man with withered hand in the synagogue. Jesus angry, grieved. Pharisees want to destroy Him. Many healed. Demons confess He is the Son of God. Called the twelve to preach and heal. Multitudes. Family thinks He’s out of His mind.  Scribes attribute His power to Beelzebub. Satan cast out Satan?  Blasphemy against Spirit unpardonable. Mother and brothers seek Him. Whoever does the will of God is brother, sister, etc.

05 - Gadarene Demoniac, Jairus’ Daughter
Demoniac  in the tombs could not be bound. Pleads with Jesus “Son of Most High”. Name was Legion. Demons went to 2,000 pigs who rushed into the sea and drowned. Leaders plead for His departure.  Healed man goes and tells. Jairus pleads for his daughter.  Woman with flow of blood for 12 years touches and pleads for healing. Jairus’ daughter is dead. “Don’t be afraid; only believe”. Talitha, cumi. She was 12 years old.

06 - Rejection at Nazareth, Sending 12, John the Baptist Killed, 5,000 Fed. A prophet is without honor except in his hometown. 12 sent to preach repentance and heal.  Herodias gets John the Baptist beheaded. 12 return and retire to a deserted place. People came, Jesus taught. Jesus feeds 5,000 with five loaves and two fish. Storm, Jesus walks on the sea and calms the storm. Anchored at Gennesaret, people came, Jesus healed.

09 - Transfiguration, Second Prediction of Death and Resurrection
Some will see kingdom of God in power. Transfiguration.  Not to tell until Son of Man risen from the dead. Elijah comes first and Son of Man suffers. Disciples unable to cast out demon of mute boy. "If you can. All things are possible with God".  "Help my unbelief”.  Only by prayer and fasting. Second prediction of death and resurrection. Greatest in the kingdom. Someone casting out demons in Jesus' name.  Millstone. Cut off hand, foot, eye. Seasoned with fire and salt.

10 - Teaching on Divorce, Third Prediction of Death and Resurrection
Man should not separate what God has joined. Jesus blesses the children.  Rich Young Ruler can’t give up possessions. Camel and Needle. 3rd Prediction of Death and Resurrection. Sons of Zebedee Request. Jesus came to serve and give life as a ransom.  Healing Bartimaeus at Jericho.

12 - Parable of the Vine Dressers, Taxes, David’s Lord
Owner sends servants. Beaten & Killed. Sends his son.  Killed him.  Owner will destroy. Psalm 118.22-23. Taxes to Caesar? To Caesar, to Caesar, To God, to God. Sadducees question the resurrection. God is God of the living.  Greatest Commandment.  Not far from the kingdom of heaven.  David has two Lords Psalm 110.1.  Avoid the pride of the scribes. Widow’s mite.

13 - Sermon on the Mount of Olives
Not one stone left. Peter, James, John & Andrew.  Wars, famines, troubles.  Watch. Will be persecuted.  Family discord.  Abomination of Desolation.  Tribulation, False Christs. Son of Man coming on the clouds with angels. Parable of the Fig Tree. No one knows the day or hour.

14 - The Passover
At Bethany, house of Simon the leper.  Woman anoints His head with spikenard. Some criticized.  The poor you will have with you always.  Judas plans to betray.  Is it I?  Woe to that man.  All will stumble and flee.  Peter will deny three times.  Gethsemane, take this cup away.  Disciples sleeping. Judas kiss. All fled including young, naked man.  High priest, no testimony.  Are You the Christ? Peter denies Jesus three times before the rooster crows twice. (Only Mark has “twice”)

16 - The Resurrection
Women bring spices first day of the week.  Stone rolled away. See young man in white. Announces resurrection. Jesus appeared first Mary M., She announces to the disciples, but they don’t believe.  Jesus appeared to two walking in the country, they announce, but they don’t believe. Jesus appears to the eleven and rebukes them for not believing.  Great Commission-Preach gospel to every creature, believers and baptized will be saved. Signs: exorcisms, tongues, take up serpents, drink poison, heal sick. Jesus received up into heaven to the right hand of God. Disciples preach with accompanying signs. 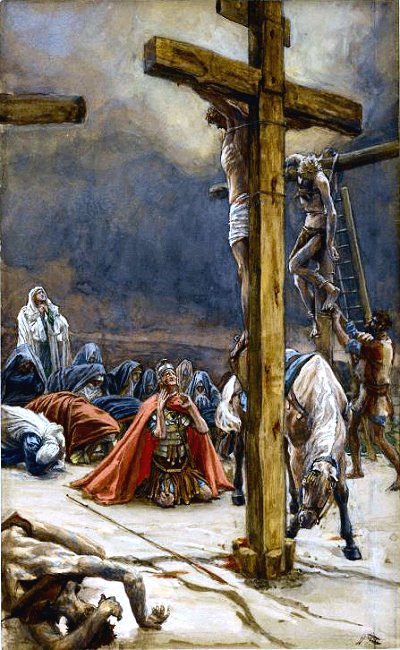 The Centurion Confessses His Faith 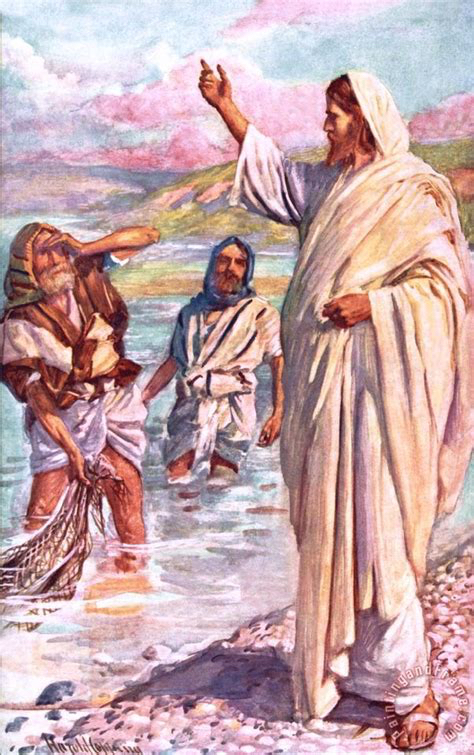 The Calling of Peter