If you like old movies, you might be familiar with the movie staring Ingrid
Bergman, The Inn of the Sixth Happiness. It is somewhat based on the life of missionary Gladys Aylward. 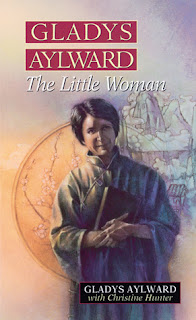 Gladys was born in 1902. She wanted to be a missionary to China, but she could find no organization to sponsor her. Small of stature and single, most thought that such a venture would be too difficult for her. Saving all her money, in 1932 she boarded a train by herself that took her across the Soviet Union on a very dangerous journey.

Arriving in China she found another missionary by the name of Jeannie Lawson, who ran and inn called The Inn of the Eight Happinesses. It was based on the eight traditional Chinese virtues: Love, Virtue, Gentleness, Tolerance, Loyalty, Truth, Beauty and Devotion. The inn provided comfort to many Chinese travelers who were entertained by Jeannie and Gladys' Bible stories.

After Jeannie died, Gladys carried on and became quite revered by the Chinese people. The Chinese government commissioned her to be a "foot inspector." This was part of a program to halt the practice of foot binding. Foot inspectors were very controversial, but Gladys was able to convince many to discontinue this practice. During World War II Gladys famously took one hundred orphans on a hundred mile journey to escape from the Japanese. Many of these orphans became Christians. You can read the rest of her story in Gladys Aylward: The Little Woman.

The eight Chines virtues bear some similarity to the Beatitudes of Jesus (Matthew 5.1-12). We usually translate the first word of each beatitude with "blessed." But μακάριοι can also be translated "happy."  Everyone wants to be happy. Even the Declaration of Independence states that "Life, Liberty and the pursuit of Happiness" is a right given by God. But people should also recognize that God, who gives this right, also shows us how happiness is attained. It is not attained apart from Him by our own efforts. People often make the great mistake of ignoring the problem of sin. Sin is the cause of all our sorrow, suffering and death, as Paul said, "Just as through one man sin entered the world and death through sin, thus death spread to all men, because all sinned" (Romans 5.12). Happiness pursued in a selfish way without thanks to God or love for Him and the rest of humankind, will be devoured and destroyed by sin.

Happiness is found through faith as Jesus said, "Blessed/Happy are those who are poor in spirit (repentant), who hunger and thirst for righteousness, who are merciful and pure in heart, etc. They shall be comforted, satisfied, be shown mercy and see God."

Prayer: Dear God, I know that You created me and everyone else for happiness. But we lost that through sin. Forgive me for following my temptations instead of following You. They always lead me to unhappiness in the end. Thank You for sending Jesus, Your Son, to show me the way of happiness through forgiveness and obedience by faith. Help me to live humbly, thankfully, lovingly and peacefully with You and all people. Amen.